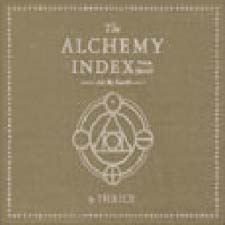 It’s 41 seconds into “The Sky Is Falling” (when the hand-claps start) that you realize the second half of Thrice’s Alchemy Index has more in common with Porcupine Tree and Johnny Cash than their 2001 debut Identity Crisis–which is essentially what the band set out to do. Earth is largely acoustic, and although it could’ve mimicked frontman Dustin Kensrue’s 2007 solo album Please Come Home, it features a more contemporary and crisp tone, with traces of oboe-aided Murder By Death (“Digging My Own Grave”) and old-time revivalism (“Come All You Weary”). Air–an amalgamation of all the elements (although closely resembling last year’s Water)–features discernable traces of Vheissu (“Broken Lungs”), but other songs (“As The Crow Flies”) never swell into crashing choruses like you expect. Alone, Air and Earth are the weakest of the EPs, but taken as a whole, Thrice have managed to convert an ultra-abstract concept into a cohesive and innovative collection.