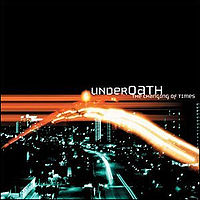 The Changing Of Times

The Changing Of Times was an Olympic pole vault-like leap forward for Underoath. The increased use of melody may have alienated longtime fans; yet the new direction proved much more successful (creatively and in terms of popularity). Dallas Taylor continues to belt out harsh yelping that resembles a trapped fox, but drummer Aaron Gillespie’s singing offers a compelling counterpoint and presaged a swarm of bands adopting the sing-scream dichotomy that would become the hallmark of “screamo.”

Though band still find plenty of time to mosh, the vastly varied and streamlined song structures proved a turning point in their development. The title song in particular summarizes the band’s ability to infuse metalcore with pop smarts and technical ability. Gone are the rambling riffs that dominated their previous two albums; opening track “When The Sun Sleeps” is a statement of renewed purpose. The predominately mid–tempo song sounds like nothing the band had done before, featuring Gillespie’s soaring melodic vocals.

The sextet still clutter the album with many harsh metal moments. The clash between the sound of the old with the tentative steps towards the new can be jarring. Still, the ’80s synths prove a nice foil to the tired metal moves in “Angel Below.” Inspired by the electronic dabbling of Refused’s attempt at genre-border crossing on The Shape Of Punk To Come, many songs feature bleeps, bloops and electro beats. Had the band managed to seamlessly incorporate such experimentations into the songs, they’d have been on to something. Still, The Changing Of Times shows a band welcoming the process of evolution.