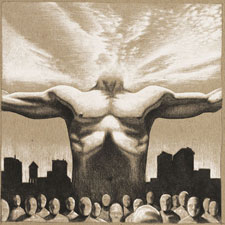 If you're a fan of the late-'90s Trustkill Records roster, which included Harvest and Endeavor, then you'll love the supercharged sound of the upstate New York act Another Breath. However, if you think those bands sound dated today, then you'll probably think the same thing about The God Complex–an album that has more in common with Harvest's Living With A God Complex than merely its album title. Correspondingly, The God Complex bounces between old school-inspired metalcore anthems ("I Want To Live") and breakneck thrash tracks ("Nausea") with undeniable urgency. Unfortunately, the final product sounds overtly formulaic in just about every way, from the recycled riffs to the shredded vocals to the predictable rants against organized religion–and to be honest, it was done far better by those aforementioned acts a decade ago. There's certainly enough potential (and genuine vitriol) here for us to gladly give Another Breath another chance, but they need to develop their own identity first