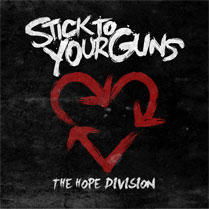 Stick To Your Guns

After one album on Century Media, SoCal hardcore band Stick To Your Guns return to Sumerian (the label reissued their debut album, For What It's Worth, in 2007) for a powerful, frequently surprising third outing. There's some clean singing here and there on The Hope Division, but that doesn't make it emo by any stretch of the imagination. These guys are cutting loose with pummeling riffs straight from the Sick Of It All/Terror school of hardcore, and lead vocalist Jesse Barnett is a pissed-off ranter who sounds clearly influenced by Agnostic Front's Roger Miret. But they're not just hardcore, something they're determined to prove at every opportunity. There are strange interstitial bits between songs—most are samples of interviews or speeches where the speakers are talking about not giving up hope, but there's also a creepy rewrite of “This Land Is Your Land,” with the lyrics changed to “AThis land is going straight to hell.” And the disc ends with a hidden acoustic, female-sung track in a kinda folk/country style (is that a ukelele?) that's nice, but has little or nothing to do with everything that's come before.

“Faith In The Untamed”