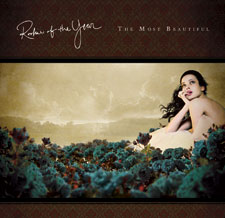 Rookie Of The Year's fourth full-length harkens back to singer/songwriter Ryan Dunson's early days; back then, the North Carolina native operated ROTY as a solo project, favoring stripped-down, acoustic pop songs rather than the full-band styling of 2008's Sweet Attention. Solo once again, it seems Dunson is hoping to rekindle some of his past success with The Most Beautiful.

Album opener "Run Away," with its reverb-drenched vocals and slowly building crescendos, wouldn't be out of place on 2006's The Goodnight Moon; even so, it seems like for every standout number ("Don't Tear Me Apart"), there's a head-scratching pseudo dance-pop track ("Frustrated (Hurricane)") or downright forgettable moments ("Turn The Page (100 Miles)"). And Dunson's cover of New Order's "Bizarre Love Triangle," while well executed, has been floating around for years now and feels like little more than tacked-on filler. Couple this with a host of guest appearances (the Juliana Theory's Brett Detar, Relient K's Matt Thiessen, the Friday Night Boys' Andrew Goldstein and The Real World: DC cast member Erika Lauren), and it seems like The Most Beautiful is Dunson's last-ditch effort to keep his fanbase rather than start a roots revival.