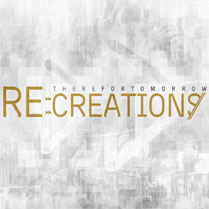 Remixes are tricky propositions, especially for a band whose music isn't aimed at a dance club crowd. Either the results sound absolutely ridiculous or they just end up sounding nothing like the source material (see Moby's remixes of Aerosmith's "Falling In Love (Is Hard On The Knees)" which reduced the entire song to one vocal hook repeated over a hard house groove). Every once in a while, the waters are just right for both band and remixer, and the result is something downright likeable. Such is the case with this new EP by Orlando's There For Tomorrow.

This self-produced effort finds the band giving their floppy-haired emo-pop electronic beats and treatments that retain the youthful strain of the original songs while adding a surprisingly effective patina of dark moodiness. It helps save the middling lyrics of a song like "Deathbed" ("I fell asleep on your deathbed/In the hole where you head rests") by covering them over with synthesizers worthy of Trent Reznor and a sexy, chrome-colored beat. Too, the jerking dubstep rhythms of their redone version of "Burn The Night Away" takes the song’s title and applies it to the simmering pulse that runs throughout this new rendition.

“Re:Burn The Night Away (Dubstep Remix)”