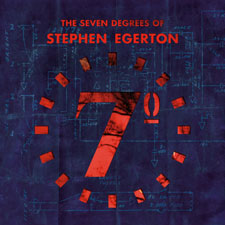 The Seven Degrees Of Stephen Egerton

The whole point, it seems, with Descendents/ALL was to make punk rock fun again after the ballyhooed LA revolution resulted in a trail of mascara compacts and a major decline in safety pin sales. Their songs were masterful homage to both the hardcore of their roots, the new wave fringe of the early ’80s, and even prophecy to then-unknown pop-punk hybrids that now dominate the musical landscape. Stephen Egerton, in essence, and along with at least two other steady musical companions in Bill Stevenson and Karl Alvarez, wrote the book on pop-punk. It’s that fact, backed up by Egerton’s wealth of songwriting skills and penchant for off-kilter guitar riffs that make The Seven Degrees Of Stephen Egerton such an amazing listen. With both of his most notable bands in an increasingly perpetual hiatus, this is an aural opportunity to hear what could and probably would have become your next favorite Descendents/ALL songs. In some cases, they pretty much are.

The album proffers the all-but-copyrighted slick and crunchy guitar tone Egerton’s toyed with and perfected over the past three decades, but goes into newer realms of songwriting as well. Tracks such as the Dan Andriano-sung “Our Last Song” are as varied mood-wise as a Breaking Things-era metal rampage, but laced with a marked attention to the pop facets more heavily employed during Allroy’s Revenge-era albums. The kicker is the Milo Aukerman-fronted “She’s Got Everything” – the only track Egerton wrote completely on his own. Aukerman’s legendarily strained vocal timbre on top of Egerton’s slippery riffs make it hard not to find yourself grinning. To turn that grin into a menace, you need only to skip ahead to “Willie Wicked,” helmed vocally by My Name/Wretch Like Me acrobatic frontman Abe Brennan.

This is the sound of a triumphant return from one of punk’s most respected, rarely mimicked, and never gimmicky personalities, and a fitting epilogue should Descendents/ALL decide to throw in the towel for good.