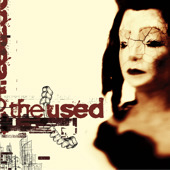 Emerging as the post-hardcore and modern-day screamo scenes were steadily building momentum in 2002, the Used clawed their way onto the map on the merits of delivering a debut that while not necessarily setting the world on fire, still managed to wield a scrappy, unique and compelling personality. From the get go, the Orem, Utah, quartet knew their way around a killer melody, and those that beat at the hearts of “Buried Myself Alive” and breakout single “The Taste Of Ink” immediately marked their capacity for writing the kind of choruses that could conceivably be screamed back at them by a stadium full of rabid fans. But what ultimately makes The Used such an engaging listen is the breadth and diversity of the 12 songs, fostering an air of unpredictability that is often riveting and never less than absorbing. Accordingly, the frantic charge of “Maybe Memories” is able to sit comfortably alongside the edgy “Bulimia,” the delicate neo-ballad “On My Own,” the nervous melancholy of “Blue And Yellow” and the aforementioned anthems, all the while managing to maintain a real sense of cohesion and purpose—which is no mean feat.


Bolstering this diversity is the inventive array of beautifully blended sounds and tones on display. Guitarist Quinn Allman is clearly deeply in love with his effects pedals and delivers one hell of a performance throughout, and the band’s sparing but imaginative use of atmospheric electronics has also arguably served to influence many of the screamo bands employing such augmented sounds in their wake. It is also important to note the significance of the dynamic production, courtesy of Goldfinger’s John Feldman, which perfectly blends the many rich textures of the band’s sound while delivering a solid punch to the head. Of course, it was this record that introduced the world to vocalist Bert McCracken, a troubled—and often troublesome—frontman whose confessional lyrics express his inner frustrations and runaway emotions, carrying a powerful sense of catharsis with them. His delivery—by turns achingly fragile, breathtakingly melodic and throat-shreddingly coarse—is perfectly complemented by the schizophrenic tone of the music and leaves the listener in no doubt that every word comes straight from the gut.


While the band would go on to eclipse the record with 2004’s In Love And Death and deliver a career best thus far with 2009’s Artwork, the originality and lasting influence of The Used should not be underestimated. The fact that the record still sounds fresh and exciting is also testament to the strength of the fledgling band’s songwriting, and it should certainly stand to engage subsequent generations discovering them for the first time.