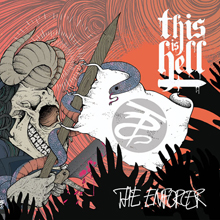 This Is Hell follow up their final effort for Rise Records, 2011's Black Mass, with this rather precise and defined holdover. The band deliver an EP where each of the four tracks has its own vibe: a mood-setting instrumental intro with a tasteful solo from guitarist Rick Jimenez (“Flag Of The Serpent”); a fluid realization of the band's current style in the title track (their best song since 2009's “The Search,” in fact); a comparatively melodic centerpiece (“Walking Abominations”); and a ripping cover of a classic band (Metallica's touring anthem “Whiplash,” available exclusively on the 7-inch version) who have clearly wielded considerable influence on This Is Hell's last few releases.

The sound is a logical continuation of the path This Is Hell have been heading down since 2009's Warbirds EP: a ferocious cocktail of '80s thrash and metallic hardcore that had seemingly reached a stylistic apex on Black Mass. But The Enforcer delves even deeper into the former era. While they retain the sort of vaguely political and apocalyptic lyrical motifs they've been developing all along, there's most importantly a less cheesy integration of melodic edges and cleaner singing from frontman Travis Reilly (notably in the Pantera-leaning “Walking Abominations”) than on Black Mass, making it a discernable improvement. But for a band nearly a decade in the trenches, more often than not eschewing hardcore trends to the chagrin of hopeful growth, how does Reilly not snarl, “We will never stop, we will never quit, 'cause we're This Is Hell!” on that cover?