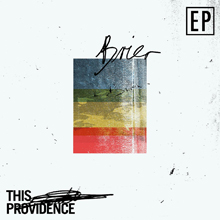 Seattle rockers This Providence are making a go of it on their own since parting ways with Fueled By Ramen earlier this year. They recently formed the DIY imprint Magic Mike Records to issue Brier, a new four-song EP to tide listeners over until a proper full-length is complete. Between its tight production and strong collection of songs, the EP goes a long way toward reassuring concerned fans, but that’s not to say there aren’t some surprises. What jumps out the most is the band’s more mainstream vibe, particularly with “Trouble”: There’s a kind of woozy, hipster-rock-meets-All-American Rejects feel that could translate into genuine radio potential, not to mention a string of royalties from TV soundtracks. “In Or Out” is straight power-pop, with a frisky verse that gives way to a sugary chorus hook, while “Deep End” excels with thick fuzz and choppy rhythms that conjure a slew of modern alt-rock influences. The real stunner, though, is the fragile closer “You’re Mine,” which pairs clean, shimmering guitar and bass lines with synthesized horns, topped with a gorgeous, almost crooned vocal performance by Daniel Young. Hopefully there’s plenty more where that came from.