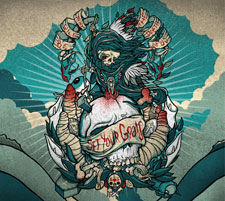 This Will Be The Death Of Us

New Found Glory comparisons will fall by the wayside with This Will Be The Death Of Us. The album isn't so much the natural extension of Set Your Goals as it is a quantum leap forward by an essentially entirely new band (neither of SYG's current guitarists played on 2006's Mutiny!). Jordan Brown's lyrics are on point: He takes on music-industry scumbags (“The Fallen…”), complacency (“Look Closer”) and his own failures (“Equals”). Co-frontman Matt Wilson has stepped out from Brown's considerable shadow with drastically improved vocals, earning his spot at the front of the stage. The disc's full of guest shots-none more memorable than Paramore's Hayley Williams in “The Few That Remain”-but honestly, SYG don't need any extra help making these songs sterling. In short: It must really suck to be Four Year Strong right now.