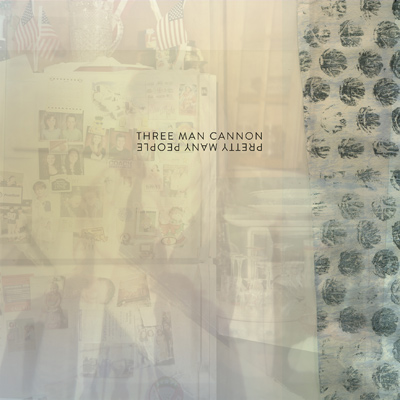 Pretty Many People is Three Man Cannon's first full-length in four years. But since the Philadelphia and Scranton, Pennsylvania-based quartet filled the gap with an EP and a split full-length with Lee Corey Oswald, and oh yeah—members Pat Brier and Dennis Mishko were in that band Tigers Jaw, helping write a shit-ton of great songs with them before parting ways in early 2013—it's no problem. With well-crafted, tasteful arrangements of punk and emo-colored indie rock conducted with a dignified pacing, fans of that band should find plenty to love on Pretty Many People, even while Three Man Cannon don't actually sound much like Tigers Jaw.

The meandering, rough-hewn folk-punk of 2010's The Sound. The Fury is long gone. A marked evolution occurred over the course of those aforementioned releases, and it seems to be fully completed now. Musically, the band's approach is far more measured and restrained than ever; even on last year's split LP, they gave into tendencies to bash through things a bit, but that never happens once on Pretty Many People. The themes aren't too overblown, either, with the band occasionally touching on the dryness and comfortability of domesticity as a metaphor for relationships or self-improvement (one song's simply titled “Bed,” and there's a late hook on “Baby” involving how “the colors seem to match”).

Though the album practically drains the band's prior aggressions so much they veer into relatively languid, passive sections at times (“Side By Side,” “DKDDK”), it's still a welcomed progression, a shadowy elegance comparable to the turn their neighbors to the west, Saintseneca, took on their recent album, Dark Arc (a similarity especially apt on tracks like “Moving Onto Martha St.” and “Patiently”). The album certainly runs the gamut of past emo/indie fare, too—the bridge of opener “Simple” could have been lifted from an early-to-mid-2000s Saves The Day B-side. While Pretty Many People drags in places, it's punctuated by real brilliance and grace, making it an incredibly promising release that's Three Man Cannon's best yet.