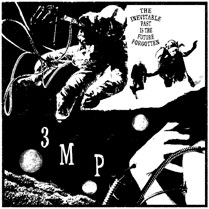 The Inevitable Past Is The Future Forgotten

The Inevitable Past Is The Future Forgotten may seem like an unwieldy album title, but it makes sense when you consider that it’s Three Mile Pilot’s first release in 13 years. If you’re not familiar with 3MP, since their hiatus in the late ’90s, the group’s members went on to form Pinback and the Black Heart Procession, a fact that is evident in the Three Mile Pilot’s most recent output. That said, time hasn’t tempered the band’s sound; swirling synths and driving drums make songs like “Same Mistake” some of the band’s most accessible and inventive output to date. However the real strength of The Inevitable Past Is The Future Forgotten is the album’s inherent variance—and the fact that droning waltzes like “Days Of Wrath” are able to seamlessly co-exist with ambient experiments like “The Threshold” make the album sound like a complete musical statement instead of a genre exercise.