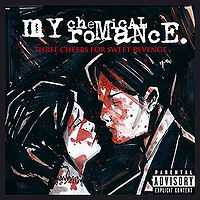 Although My Chemical Romance began gaining popularity with their 2002 debut I Brought You My Bullets, You Brought Me Your Love, it was really their 2004 sophomore effort that both showcased their songwriting skills and gave them much-deserved attention. The disc, which opens with Gerard Way’s breathlessly compelling delivery of the mournful “Helena,” holds up as a cohesive collection of tracks that skirt the line between pop-punk and edgy, theatrical emo. The record, which Way described as a pseudo-conceptual horror story, is replete with singles—the deceivingly bouncy “I’m Not Okay (I Promise),” “Helena” and propulsive rocker “Thank You For The Venom”—but manages to be catchy without glossing over its sharpness.

The non-single tracks are some of the album’s best: The Western-tinged “Hang ’Em High,” with its raucous guitar riffs and Way’s shrieking howl, stands out as an innovative approach to the typical pop-punk style of the mid-’00s. “The Jetset Life Is Gonna Kill You” offers up a likeably jittery melody and even more likeable rendition of the line “Aw, sugar” by Way. It’s actually hard to cherry pick the standouts—each song is worthwhile and rambunctiously attention-grabbing, drawing the listener in with its sense of reckless abandon and rowdy desperation that seep through both the music and Way’s lyrics. The disc steps up from its predecessor, in songwriting and in production (which is cleaned up but not overly polished by Howard Benson), and, in some ways, outshines MCR’s more recent efforts.