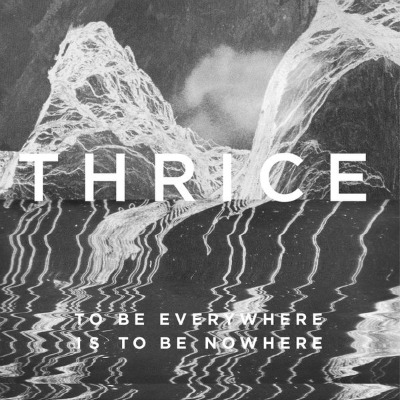 To Be Everywhere Is To Be Nowhere

If you ever had any doubt there would ever be another Thrice album, you weren’t alone. n our recent interview with the band's drummer Riley Breckenridge, he even expressed doubt that the band would return from a four-year hiatus let alone write their ninth full-length. Yet here we are on the eve of the release of To Be Everywhere Is To Be Nowhere—and it sounds as if somehow Thrice were there all along, quietly crafting an album that's as inspiring as it is unexpected.

The album opens with the cathartic crusher “Hurricane,” which is as furious as the seas that toppled Babylon and finds frontman Dustin Kensrue intoning “I'll never fade into the night” as cymbals and distorted guitars crash all around him. Thrice remain nothing if not heady, and while the album could simply be comprised of melodic hardcore anthems that would please fans of their 2003 breakthrough The Artist In The Ambulance, instead, To Be Everywhere Is To Be Nowhere finds the band heading elsewhere. “The Window” is reminiscent of a post-hardcore Radiohead, giving bassist Eddie Breckenridge a chance to shine while the ensuing minimalism proves Thrice still have  a subtle grasp of dynamics that only comes from playing together their entire adult lives.

In that spirit, To Be Everywhere Is To Be Nowhere also features the ambient minute-long interlude “Seneca.” It serves as the perfect precursor to the album's strongest song “Black Honey,” which sounds like a more technical version of Alice In Chains thanks to guitarist Teppei Teranishi's atmospheric accompaniment. It may have only been five years since Major/Minor, but there's a weathered timbre in Kensrue's voice on tracks like “Stay With Me” that helps propel the chorus even further toward the stratosphere. Maybe it's fatherhood, maybe he's gotten out his folk fix via his solo recordings, maybe it's the fact that the current political climate makes it seem as if the apocalypse is impending. Whatever the catalyst, it's clear that Kensrue isn't going down without a fight.

Thrice have always had an innate ability to make music that was heavy enough to mosh to yet cerebral enough to reveal more of itself through each subsequent listen. Tracks like the explosive “Whistleblower” show that this dynamic has only grown stronger since they stepped away from the band. It's apt then that the album ends with “Salt And Shadow,” an experimental song that features multi-layered harmonies, ethereal instrumentation and an eerie quality that recalls a David Lynch soundtrack. Most bands wouldn't be able to start an album with punishing guitars and end it with a delicate piano line, but that sort of versatility has always been at the core of Thrice's sound. Having managed to retain that after so much time apart is an accomplishment unto itself.

Ultimately, To Be Everywhere Is To Be Nowhere is a small triumph not just in its existence but also in its execution. Second chances don't normally sound this sweet.