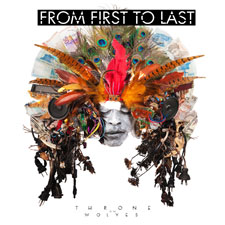 Throne To The Wolves

From First To Last are coming out swinging, determined to earn back fans' trust after their disappointing third album, From First To Last, released to a resounding thud on Geffen imprint Suretone in 2007. Vocalist/guitarist Matt Good has finally become a true frontman; his sneering, whisper-to-a-scream vocal assault is captivating, and the band create a whirlwind of metallic riffs and thunderous beats (some real, some programmed) behind him. "I'd rather be a starving artist than a wealthy critic," Good howls on Throne To The Wolves' lead cut, "Cashing Out," and he's utterly convincing. With the support of a new label, Rise, FFTL have nothing to lose by being utterly themselves. The blazing electro-thrash of "Elvis Said" is balanced by the prog-metal balladry of "You, Me And The Significant Others," while the album's closer, "Now That You're Gone," creates dissonance with synth and Auto-Tune. Even with only two founding members still around, it's good to have the old, weird FFTL back.