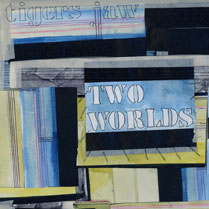 Any band who manage to persist past one album usually face the question of direction. Some stay stuck in comfortable patterns; others risk failure and condemnation trekking down unusual paths. Tigers Jaw sufficiently covered late-’90s pop-emo terrain. Their previous full-length and subsequent single and split releases featured some vigorous nods to the greats of that era (the Get Up Kids and the Promise Ring). While Tigers Jaw knew how to conjure the energy, they had a thing or two to learn about applying the hooks and melody.

Two Worldsshows significant strides in the band's command of pop songcraft. But what launches the band beyond their humble beginnings is not an increased ability to mimic their idols. Instead, Tigers Jaw begin to carve a more original sound. They push the male/female vocal interplay and the keyboards to the forefront. They also spice up the song structures just enough to count. It's not as if they've gone prog and given time signatures over to jazz-like whims. Actually, most remain fixed in proper 4/4 time. But the bite-sized song lengths (averaging two minutes), mammoth choruses, nuanced vocal approach and lyrical complexity make Two Worlds an artistic leap forward.

Where they dare to defy past frameworks and dispense with overused crutches, Tigers Jaw shine. The hangdog blues of the title track is especially surprising and effective. Vocalist/guitarist Adam McIlwee’s and keyboardist Brianna Collins’ vocals complement one another perfectly. With the ringing keyboards, the overall tone is fittingly morose and compelling. The moody, acoustic detour “I Saw The Wolf” is equally as moving and memorable.

This is not to say the band forgot how to rock. Half of Two Worlds features careening pop songs delivered with enough muscle and heart to give Jawbreaker a run for their money. “Return” boasts excellent dynamics, with a stop/start stuttering middle that recalls overlooked Pennsylvania treasure Ethel Meserve. The band also appreciate the efficacy of brevity. While there is something to be said for short songs, some of Two Worlds feels a bit soft in the middle. “Smile,” “Let Go/Trashed Floor” and “Thank You, Noah Lowry” are adequate; but they could have been top-notch with further elaboration and exploration. The band should have fleshed out and gussied up these songs with interesting maneuvers and show-stopping choruses.

Tigers Jaw discovered the secret of the Get Up Kids and the Promise Ring: When the spotlight turned to bands blatantly biting their styles, both produced their finest work. Tigers Jaw understand this; they’ve followed a parallel evolutionary arc and they are the better for it.