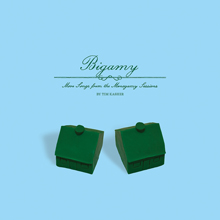 By now we know what to expect from Tim Kasher. Since Cursive’s 2000 album Domestica, his releases have been cinematic concept albums predominantly preoccupied with affairs of the heart. While Cursive explore slashing post-punk with baroque touches, Kasher’s solo explorations with the Good Life (and now under his own name) have delved even deeper into chamber-pop theatricalism like some vaudeville cabaret featuring an existential romantically challenged host.

Last year Kasher released The Game Of Monogamy, which—much like the Good Life’s 2004 effort Album Of The Year—traces the course of a relationship. But six years in a long time in a young man’s life—long enough for Kasher to pass into his mid-30s and begin to feel the weight of his decisions. The Game Of Monogamy was an overture to middle age and the declining allure of the bars and hook-ups scene. As the title of this EP suggests, these six originals (and a cover of Azure Ray’s “Trees Keep Growing”) are cut from the same cloth. However Kasher’s such a terrific writer that they hardly seem like throwaways and would have easily fit on the full-length (barring the weak, over-extended metaphor “Rabbit, Run”).

Kasher expresses his feelings concisely on “A Bluer Sea,” complaining, “I can’t decide how to ruin my life/It’s a shame whichever I choose I’ll be doomed to despise,” before acknowledging it may be a deficit in his nature because he’s “too spoiled to appreciate when life is merely all right.” It’s one of Bigamy’s signature tracks, with Kasher’s romantic angst balanced by high-pitched female vocals operating like a Greek chorus within a bed of gothic-tinged plucked violin, against percolating new-wave keyboard melody suggestive of the Cure. In the refrain, Kasher mutters repeatedly, “I drink, I drink, I drink,” then “I drift, I drift, I drift,” indulging the ambivalence of his quandary in the chorus, “Without an anchor I am free… Without an anchor I’m a wreck.”

Bigamy is pocked with lyrical highlights and several more particularly strong numbers. The album-opening “No Harmony” really sets the mood, beginning with an acoustic strum before swelling with anguish as he considers the rewards of a one-night stand: “We could share our emotional scars/Your deadbeat dad, my haywire mom/Doesn’t matter if we click or not/It’s a competition who gets who off.” He pegs himself as Peter Pan and the pretty young girls as denizens of Never Never Land, trying to talk himself into pursuing someone his own age—or perhaps the town floozy. (“And maybe she’ll be thinking the same about me.”)

It’s followed by the quiet pastoral folk of “Opening Night,” which considers the downward slope of age, going from “desperately wanted now to desperate to be wanted like we were wanted before.” It features the album’s finest pun, as Kasher considers the narcotizing impact of marriage and suburban living: “I hope I die before I’m a dolt.” But this isn’t “My Generation,” and Kasher’s all too aware of his mounting inadequacy for any bold proclamations. While he’s obviously a miserably disconsolate bastard, it lacks the same level of narcissistic martyrdom as say Coldplay’s Chris Martin. Kasher readily acknowledges his failings, and in that lies the allure of his heartbreak porn. While self-awareness can be its own crutch (verging perilously close to navel-gazing), you don’t begrudge the disability when it’s delivered with such honesty and cleverness. So if there’s an element of indie-cinema dolor and glorious self-administered dysfunction, one can’t escape the knowledge that on a certain level, he’s speaking for all of us.