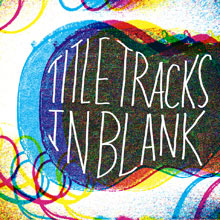 As awesome as Q And Not U were, it’s easy to miss the Washington, D.C., post-hardcore specialists a lot less when listening to ex-drummer John Davis’ solo project, Title Tracks. With his second record under the moniker (he also made up half of indie duo Georgie James for a bit), Davis has come into riches of catchy melodies he decorates with harmonies recalling British tunesmiths like Elvis Costello, Squeeze and XTC. Judging by lyrical jabs like “You’ll see the ghost in me has no respect for where you’re standing,” Davis is also in tune with his predecessors’ gifts for masking anger within sweet, flowing vocals. Maybe it’s Davis’ touring past with Ted Leo, but a number of cuts echo the Pharmacists’ bright pop-punk leanings, especially “Cain And The Twigs.” Ably backed by bassist Michael Cotterman (ex-the Loved Ones) and Andrew Black on drums, if there’s any flaw to the Title Tracks formula, it would be that they could make a few moments more flawed. But that’s just the Q And Not U fan talking.