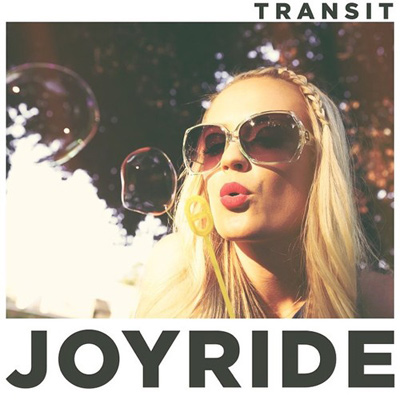 There’s something about the pattern of the past three albums by Boston indie punks Transit that feels like a band either on the cusp of something incredible or a complete collapse. There’s an easily identifiable willingness to push their sound on Joyride, which is admirable, but the band are also keenly aware of their melodic punk beginnings, which holds them from jumping off the Top 40 cliff. Sometimes they come up with gems, like the catchy, dynamic pop songs “Sweet Resistance” and “Rest To Get Better,” and other times they miss the mark—“Saturday Sunday” is also a pop song, but registers way too high on the cheese factor.

Despite the hits and misses, it’s a great creative groove to be in, and Joyride shows just how far this band can reach with arms grasping at indie rock, pop-punk, emo and melodic alt-rock. Bringing back the same production team from their 2011 Rise Records debut, Listen & Forgive, the band let Gary Cioffi and Steven Haigler (Brand New, Pixies) massage an even more adventurous album than last year’s Young New England out of them; a bold move considering that previous album was met with some disapproval from longtime fans.

Joyride can be a tough album to digest; it’s a long 12 songs with some left-field departures that will definitely raise some eyebrows (the lyrics to punk-swing number “Nothing Left To Lose” will cause some guffaws). There’s no debating that Transit have five albums worth of adventurous, melodic rock to spearhead what could be an admirable career similar to that of Jimmy Eat World. But then they flirt with the mainstream again, like on ham-fisted emo tracks like “Fine By Me” and “Loneliness Burns,” and it’s quite unclear what direction they’ll end up going.