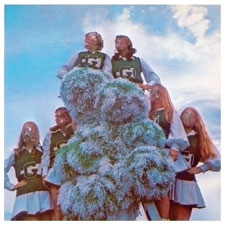 Everyone hears something different in Sleigh Bells’ bombastic art-rock collages, from power tools to motorcycle engines to electro-thrashers Atari Teenage Riot to hip-hop bruiser Swizz Beats, and no one is wrong. But let’s not forget the axe–nay, jackhammer–lineage of guitarist/producer Derek Miller, who used to shred with South Florida post-hardcore pioneers Poison The Well. Although there’s nothing approaching the caustic bleat of PTW singer Jeffrey Morreira in Sleigh Bells, Miller’s current guitar pyrotechnics in “Tell ‘Em” can be traced all the way back to the first half-minute of decade-old “Nerdy” off his old band’s full-length debut, The Opposite Of December. Miller has long been a proponent of using alternate tunings to build riffs as big as fortresses, and Treats takes full advantage.At the vocal helm is Alexis Krauss, who employs a fierceness close to Veruca Salt’s Nina Gordon on the stripped-down punk stomp “Infinity Guitars.” A softer lilt comes from Krauss on “Rill Rill,” which pillages Funkadelic’s woozy acoustic guitar and piano backing from “Can You Get To That” and adds approximately 8,000 people snapping at once. The resulting track is reminiscent of another early-2000s relic, Australian sample gurus the Avalanches. One last reference:Treats is exactly what would be blasting out of the PA speakers for the anarchic cheerleaders from Nirvana’s “Smells Like Teen Spirit” video. Even when the songwriting slips a tad (“Rachel”), the album’s cohesive energy never subsides.The entirety of compelling pop music these days is inevitably commentary on what came before — look no further than brash, Clash-revisionist M.I.A., who put out this album via her N.E.E.T. imprint — but rarely can sheer, brute force from a pair like Miller and Krauss make everything that comes afterward seem so irrelevant.