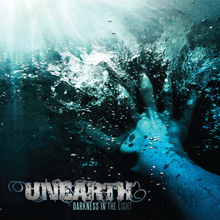 Darkness In The Light

Album No. 5 for Massachusetts’ Unearth puts them atop the heap of new-generation thrash-metal bands. Now that moshers such as Shadows Fall and God Forbid seemed to have peaked and all but gone away (neither have made a peep since 2009), Unearth are a slightly younger, leaner band ready to lead the charge.

Darkness In The Light is a maelstrom of melodic riffs, screamy shouts and enough noodling to keep Guitar Hero nerds happy. But it’s not chasing maidens and slaying dragons; Unearth have enough of the ’90s straight-edge hardcore scene still left in their blood to give the lyrics an impassioned warrior cry against corrupt politics and wavering faith. See the words to opener “Watch It Burn,” which also features an honest-to-goodness open-E-chord breakdown. In 2011! Best of all, they don’t overdo their mighty breakdowns, which bogged down previous albums.

Other parts of Darkness In The Light (like pretty much the entirety of “Eyes Of Black”) are lifted from the heyday of Bay Area thrash, such as Testament, Exodus and other bands who absolutely rule. That’s not to say that Unearth sound dated and are borrowing exclusively from other scenes; the bad-cop/slightly-worse-cop vocals, along with some straight-up good-cop vocals from guitarist Ken Susi, are a tad more approachable than current metalcore, there’s a progressive edge thrown into the power-chord stew and the graveyard riffs on the final track, “Disillusion,” come out of nowhere and would fit right in on a latter-day Entombed album. Fans of extreme metal will find Unearth’s latest release a tad too light, but anyone who likes metal in their ’core should go completely bat-shit over this album.