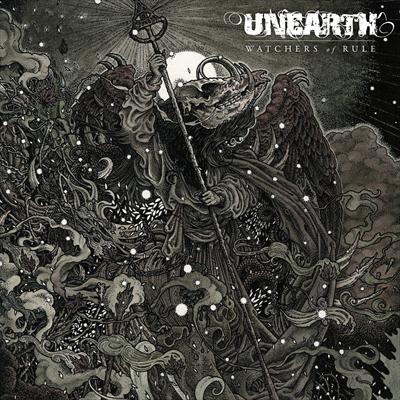 Watchers Of The Rule

If there’s one word that sums up Watchers Of Rule, it’s “battering.” Anyone expecting the successor to 2011‘s Darkness In The Light to take its cues from that record’s soaring choruses and plethora of hooks should brace themselves, for this is the hardest, most obstinate and all-out aggressive Unearth release since 2004's The Oncoming Storm. In fact, its toughened edges often exceed even this, and the sheer relentlessness of the whole thing may be a little overwhelming for some on the first few spins, but there is much more to the record than sweet blunt force trauma.

Getting the brief instrumental opening intro out of the way, “The Swarm” erupts with a storm of pure death metal blasting, signaling their intent. Having long since proven themselves the kings of the machine gun breakdown, this time out their instantly recognizable style of pneumatic chuggery dominates, its armor-plated edges hacking through verses, choruses and any other damn part they see fit. However, though the widescreen choruses and guitarist Ken Susi’s clean vocals are gone, amidst the violence the record still packs a melodic punch, driven by the lithe fretwork of Susi and Buz McGrath. The militaristic bludgeon of “Lifetime In Ruins” is strengthened by sinister leads, the hammering judder of “Never Cease” counterpointed by a coiling tapped melody and the urgency of the title track is upped by their restless fingers and an ominous Nile-esque quality. Likewise, every solo cranks things up another notch, and vocalist Trevor Phipps has never sounded more formidable, his roar bringing an almost apocalyptic air to proceedings.

Turning their collective back on their more radio friendly—and thus commercial—elements is a ballsy move, for had they carried on in that direction they would more likely increase their potential fan base. This decision may well alienate some of the fans picked up with Darkness In The Light, but then the more melodic sound of that record did likewise for some long-term faithful. Regardless, they deserve respect for switching things up, and at the end of the day Watchers Of Rule is thrilling, visceral, state-of-the-art modern metal with no compromises.