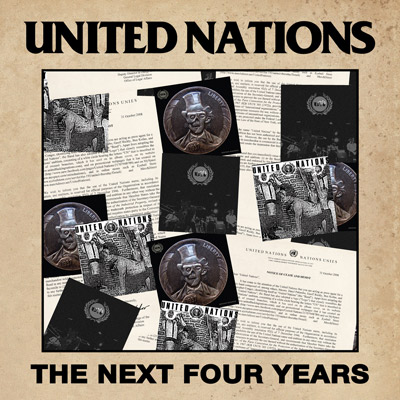 The Next Four Years

United Nations were an act deliberately shrouded in mystery for some time. While Thursday frontman Geoff Rickly has been the face of the band since initially conceiving them in 2005, the act avoided possible record contract violations and lawsuits from the actual United Nations with all-star members like Glassjaw's Daryl Palumbo and Converge's Ben Koller playing anonymously. After a considerably revamped lineup, the band seemingly finalized themselves based on a late-2013 tour with the like-minded Circle Takes The Square: Rickly on vocals, Acid Tiger's Lukas Previn and the Lovekill's Jonah Bayer on guitars, and the rhythm section from Pianos Become The Teeth, bassist Zac Sewell and David Haik.

But who actually recorded the various material that makes up UN's first full-length in six years (and whether this even counts as a proper LP) is still sort of uncertain. The physical version is a box set containing two 7-inches, a 10-inch (likely Music For Interchanging Parts, an EP the band had been planning on releasing via Temporary Residence since at least 2008) and a cassette (the self-released Illegal UN EP sold on tour in early 2013). What really matters, though, is that The Next Four Years offers a sprawling collection of the band's furious grind/powerviolence-tinged screamo with lyrical themes—when you can make them out—of white privilege guilt, capitalism skepticism, and how best to place tongue in cheek with some transparency.

Speculatively, one of the 7-inches opens the album with two of its standouts: “Serious Business” and “Meanwhile On Main Street.” The former starts off with a familiar rush of blast beats, while Rickly leads with his raspy, demonic scream that lets off occasionally for a shout or murmur. He'd always sounded a bit Mephistophelean at times in Thursday, but he reaches near Jacob Bannon-like levels of searing evil here, even if UN are far more Orchid/Majority Rule than Entombed/Starkweather. In fact, both tracks don't sound terribly far off from Thursday during certain junctures (notably the opening minute of “Meanwhile On Main Street,” and the bridge of “United Nations Vs. United Nations” is straight off A City By The Light Divided with added spasms), and that's not terribly surprising given that the earliest UN material was actually intended for Thursday. The slight variations in how the vocals and guitars sound give away that The Next Four Years probably is a compilation (hell, the title itself is cribbed from a legendary compilation, so there's one major indication), but its flow isn't terribly choppy, and it's littered with some riveting points that rival the intensity of anything else in the band's growing catalog. For those already familiar with Illegal UN, it's nice to have somewhat more listenable versions of standouts like “Fuck The Future” and “Stole The Past,” though other blistering tracks like “United Nations Find God” and “Between Two Mirrors” certainly have their own moments of anthemic yelps and grinding thrusts. Nearly a quarter of the record is taken up by the seven-minute “F#A#$,” with a drawn-out bridge that predictably builds to a pounding, ravaged ending, wrapped up next by the comparatively anti-climactic “Music For Changing Parties.”

The Next Four Years has been a long time coming, an enjoyable summation of what United Nations has been able to piece together with the demise of Thursday a fading memory and Pianos Become The Teeth likely ramping up for a big LP3 push. It may not have the continuity or cohesive potency of a Document #8 or City Of Caterpillar, but it's a pleasant rage like few others coming out and, when necessary, clearly shouts what it wants to be heard.