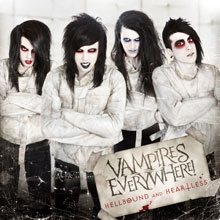 Vampires Everywhere! debuted last year with Kiss The Sun Goodbye, an Auto-Tuned pop-screamo album that didn’t set the scene on fire as much as the band hoped. Now, VE! have rebranded themselves as “shock rock,” but the music on Hellbound & Heartless neither shocks nor rocks. They’re going for a Marilyn Manson vibe, but even Hellbound’s best moments come off sounding more like Orgy. All gimmicks aside, frontman Michael Vampire sang well on VE!’s older material, displaying strong vocal chops. But for reasons we can’t understand, he’s gone from a strong tenor voice to a distorted, monotone yell, which when coupled with his lyrics about drugs, death and going to hell, makes the record an exhausting listen. Add in some pick-sweeping wankery straight out of a Sam Ash showroom, and this could end up being one of the worst albums of 2012. (The less said about the band’s cover of Nirvana’s “Rape Me,” the better.)