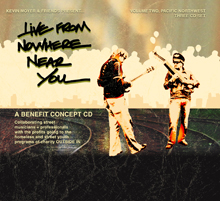 Live From Nowhere Near You: Volume Two

Compilations by nature have a strong odds & sods bent, and Live From Nowhere Near You is no exception. Extending across three discs, 65 tracks and almost four hours—and featuring recordings from more than 50 different artists—it’d hard for it to be otherwise. But it’s questionable in the internet age whether that even matters, particularly since there are around 18 real keepers on the release, including cuts from Elliott Smith, the Ettes, Daniel Johnston, Modest Mouse, Eddie Vedder, Ryan Adams, the Helio Sequence and Wilco. Most people will cull out their favorites—though if one only looks for the big names, they’ll miss at least a half-dozen fine tracks by lesser-known artists.

The finest moments occur on disc three, which is highlighted by a trio of terrific unreleased tracks by Portland icons Modest Mouse, Elliott Smith and No. 2. The No. 2 cut “Who’s Behind The Door” is punchy, somewhat psych-inflected indie pop with a cloudy, Pacific Northwest indie-rock air, and includes Smith collaborating with former Heatmiser chum/No. 2 frontman, Neil Gust. It’s followed by Smith’s “The Real Estate,” which boasts a pretty melody, swooning keys and a metaphor about flipping for profit as opposed to sticking it out in even the worst of situations. The Modest Mouse track, “Dead End Job At The Dead Letter Office,” an ode to taking a wrong turn, goes back 18 years to their knotty, ambling blend of mumble and outburst.

Other unreleased gems include Ryan Adams’ tender, rootsy “Shine Through The Dark,” the wonderfully chunky Helio Sequence rave-up “Heart Disease” and Eddie Vedder, the Strokes and Josh Homme offering a pretty sharp take on Marvin Gaye’s prescient classic “Mercy Mercy Me (The Ecology).” James Mercer delivers a fine solo harmonica-and-guitar live take on the Shins’ “Caring Is Creepy,” which brings the poignant prose even closer to the bone. There are also some well-chosen previously released cuts by Presidents Of The United States Of America (“Love Everybody”), Daniel Johnston (“Grievances”), the Ettes (“Spend My Money”), Wilco (“Someday Some Morning Sometime”), and a demo take on Black Rebel Motorcycle Club’s rumbling “River Styx.”

However, it’s not just a party for the A-list. Lesser-known rapper Peter Miser offers a couple of terrific, golden-age-flavored tracks (the bustling “Call On Me” and soulful “Where Do We Go From Here”). Dusty, forlorn Mississippi singer/songwriter Joe Whaley sounds like a more somber Gary Louris of the Jayhawks on “I’ll Always Be There For You” and “Save Me From Destruction.” Equally impressive is Dandy Warhols drummer Brent DeBoer’s “Is That All,” which was released on his 2010 debut, The Farmer. From the supple picking to the hushed delivery, it recalls Either/Or-era Elliott Smith. However, the finest of these unsung artists is Menomena member Danny Seim’s solo project Lackthereof, whose “The Columbia” (anthologized on a Barsuk collection a couple years ago) breathes with gruff beauty over plucked banjo and strummed guitars abetted by ghostly harmonies.

It’s a testament to the wealth of talent residing in Portland that they were able to assemble such a fine collection of tracks. Between the unreleased rarities, choice previously released tracks and a smattering of under-the-radar artists, this compilation is a little treasure that just happens to help less fortunate young people stuck on the streets: All the proceeds will go to Outside In, a Portland, Oregon, organization that works to help homeless youth and other marginalized people build a more stable life for themselves. That’s pretty much the definition of win-win.