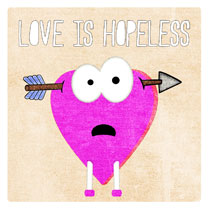 Before you roll your eyes at the very idea of a Valentine’s Day comp, which admittedly, could easily devolve into a mass of pathetic, woe-is-me emoting and merciless ex-bashing chock full of lead-pipe metaphors, trust in Hopeless Records’ substantial pedigree for promoting quality jams and give this one a shot. Featuring a surprisingly eclectic range of artists with varying takes on the oft-dreaded Hallmark holiday, Love Is Hopeless offers something for everyone, whether you’re spending Feb. 14 serenading your amour or lying on a bed of black, shriveled roses.

For The Foxes kick off the eight-track collection with “Some Things,” a jangly dream-pop rebuke that could’ve been found on a Jellyfish record, straight into We Are The In Crowd’s “Never Be What You Want,” an upbeat acoustic male-female duet that sparkles with smooth vocal harmonies. Divided By Friday lend an inspired take on Nat King Cole’s “L-O-V-E,” turning it into a churning rocker that recalls textbook Jimmy Eat World, while Anarbor take the stripped-down approach with the acoustic “Love Instead,” showcasing Slade Echeverria’s considerable pipes. Silverstein’s Shane Told takes a break from scream-singing with a subdued rendition of the Elvis Presley classic “Can’t Help Falling In Love,” which admittedly lacks oomph, but the Dangerous Summer’s “Never Feel Alone” brings back the strum-pulse of the album, almost sounding like the Wallflowers at times. Overall there’s a strong rhythm and some nice earthiness to the collection that makes it fly by at warp speed. Damian Suomi’s mournful “Archer Woman” and “Borrowed Chords” by Aaron West & The Roaring Twenties close things nicely, once again focusing on restraint and nuance; something all too rare these days.

Granted, Love Is Hopeless could use a little more tooth at times—all the acoustic balladry blows by as light as a lover’s whisper—but it’s certainly a worthy addition to your playlist this month, especially if you’re a hopeless romantic.