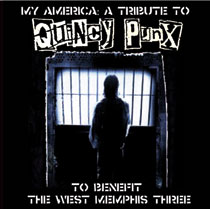 My America: A Tribute To Quincy Punx

As drummer Mike Robertson explains in the liner notes to My America: A Tribute To Quincy Punx, his band were not ones to get too serious with their songs’ subject matter, instead preferring to keep their material pretty silly (see lyrics to “Eat A Bowl Of Fuck” or “Cereal Killer,” for example) and finding inspiration in such things as horror movies and beer rather than socio-political issues. Thus, it might seem strange he decided to put together this tribute album in order to support a serious cause, but he did. In fact, all proceeds from My America are going towards the legal defense fund of the West Memphis Three, a trio of young men who were accused of murder in 1993 based on seemingly faulty police work and evidence. Robertson rounded up 28 bands, many from the band’s hometown of Minneapolis (including Quincy Punx themselves, who cover the Vindictives' "Get Lost"), to help him out and the result is a fun compilation.

For those unfamiliar with the band, Quincy Punx were an integralpart of the ’90s underground punk scene alongside Blanks 77 and the Casualties. Being that they played raucous, fast and snotty punk, one might think this tribute album would feature solely bands of a similar style, but that’s not the case as some interesting exceptions are included—most notably, P.O.S.’s hip-hop version of “Safety Pins”; the quirky, synthed-out take on “Gendercide” by Trapezoids; and the slowed-down and heavy “Tour” from Angel Dust. Still, the majority of songs are in the punk/hardcore vein, with some of the true standouts being the Ugly Fat Kids’ melodic rendition of “Eat A Bowl Of Fuck,” Off With Their Heads’ aptly insane “NicFit,” Falcon Crest’s take on “Murder At The Senior Prom,” Misery’s ferocious version of “Insanity,” Ripsnorter doing the messed-up zombie love song “Tina” (“Oh, Tina, if you really love me, you’ll let me eat your brain”) and Total Fucking Blood’s even-crazier-than-the-original “Nuke Seattle.”