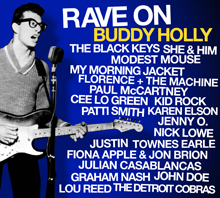 It’s no small achievement that bespectacled ’50s rock icon Buddy Holly—who was tragically killed in a 1959 plane crash, aged 22—still inspires countless artists today. However, his impact runs much deeper than merely informing some retro, geek-chic fashion aesthetic or providing a kitschy, Happy Days-themed hook for a Weezer song. Ample proof is found on Rave On Buddy Holly, which pays tribute to Holly in remembrance of his coming 75th birthday not by producing carbon copies of the originals but rather by capturing each contributor enjoying the freedom to rework their track with their own style. Some stay fairly true, while others offer bold new interpretations of these classics, illustrating just how universal Holly’s work really is.

Boasting 19 tracks, the compilation has much to offer even the most completist collectors. You can marvel at the woozy, understated beauty of the Black Keys’ take on “Dearest,” or Paul McCartney at his fuzziest, belting “It’s So Easy.” Nick Lowe’s “Changing All Those Changes” is spot-on authentic, yet She & Him go in a totally different direction with “Oh Boy,” turning it into a swim through acoustic grunge, and the Detroit Cobras turn “Heartbeat” into the best Blondie song ever. Modest Mouse exhibit their standard level of genius by radically overhauling “That’ll Be The Day” with a palette of new textures, including orchestral synth and shuddering bass, while Kid Rock kicks it Motown style with “Well All Right,” and My Morning Jacket’s haunting cover of “True Love Ways” is so stunning, it blows everything else on the tribute away.

It’s tough to find fault with such an inspired collection, but some moments aren’t quite as standout as others. Lou Reed’s monotone and synth-driven “Peggy Sue” fails from muddled execution, not concept; Julian Casablancas’ “Rave On” seems to be similarly short on performance clarity, focusing more on distorted background tones; and John Doe’s “Peggy Sue Got Married” lures you with real promise, but doesn’t quite deliver the expected climax. Admittedly, these minor flaws detract only modestly from the overall experience.

If there’s a lesson to be learned here, it’s that great music isn’t just great in its “original” presentation—it can have a lasting effect well beyond those initial recordings, driving future artists to absorb that wonderful material and make it their own. Buddy Holly may be long gone, but his music is fortunately as alive as ever, and in some cases, sounding as fresh as it did in 1959.