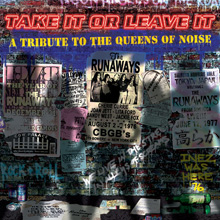 Take It Or Leave Itâ€”A Tribute To The Queens Of Noise: The Runaways

There are several problems with this two-disc tribute to the Runaways. The biggest is that it starts off almost too strong—the first disc opens with the Donnas’ version of “Queens Of Noise,” followed by Shonen Knife’s take on “Black Leather.” Those are followed by a bunch of substandard versions of the half-decent glam-punk songs that padded out the Runaways’ four-album discography. While some are pretty good (Delirium Tremens’ speed-crazed take on “Wasted,” Cali Giraffes’ “You’re Too Possessive” and particularly Tara Elliott & The Red Velvets’ steamy, blues-rock strut through “You Drive Me Wild”), others are just not.

The two biggest disappointments are the Dandy Warhols’ sludgy, zoned-out version of the Runaways’ signature song, “Cherry Bomb,” and the electro-fied duet of “Dead End Justice” by Kathleen Hanna and Peaches, two of the most annoying performers in the history of Western culture. Another puzzling thing about the compilation is that some bands have chosen to cover songs which were already covers: The Runaways recorded versions of the Velvet Underground’s “Rock N’ Roll” and the Troggs’ “Wild Thing,” both of which are redone here. Ultimately, these weak tracks (and the pointless inclusion of snippets of the band members, radio DJs and other musicians of the era talking about them) undermines the whole exercise, making Take It Or Leave It a slog when it should be a blast.

The Donnas’ “Queens Of Noise”