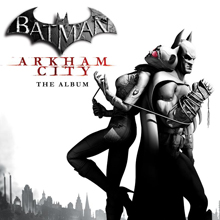 The soundtrack to the sequel of 2009’s mega-selling Batman: Arkham Asylum video game, Batman: Arkham City – The Album is comprised of 12 tracks from artists invited to provide their own unique takes on the stories and mythology surrounding the caped crusader. As such, the songs generally reflect the gothic, brooding (and at times unhinged) visuals of the game and the associated iconography of the franchise. Bookended by the two strongest entries—Black Rebel Motorcycle Club’s hypnotic dirge “Shadow On The Run” and Serj Tankian’s eerier than hell “Total Paranoia”—the quality of the songs varies throughout, though less so than might be expected from such a collection.

Coheed And Cambria’s epic “Deranged” and †††’s “The Years” are heavy on drama (and are thrilling listens), while the Boxer Rebellion’s “Losing You” and A Place To Bury Strangers’ “In The Shadow” kick up the tempo in style while maintaining the potent darkness of the slower tracks. The Damned Things’ rough-and-ready “Trophy Widow” is a blast but seems a little shoehorned in, failing to match the tone of those surrounding it, but remains leagues ahead of the post-grunge drudgery of Daughtry’s “Drown In You.” Also in the less-essential column: Panic! At The Disco phone it in on “Mercenary,” and the Duke Spirit’s electro romp though “Creature” is forgettable stuff.

While gamers will have the songs etched into their brains whether they want them or not, the vast majority of listeners will of course grab the tracks by their beloved bands and ignore the rest. But those who do venture to listen to Batman: Arkham City – The Albumin its entirety may well find that it offers more than the average thrown together collection of leftovers masquerading as a soundtrack—but not by much.