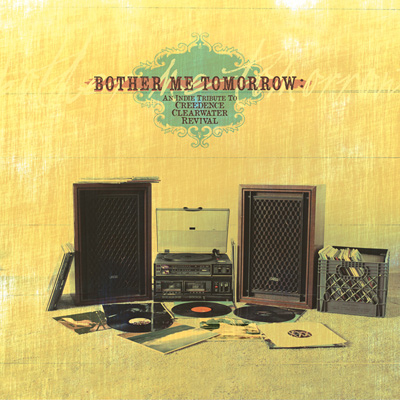 Bother Me Tomorrow: An Indie Tribute to Creedence Clearwater Revival

It doesn't matter what decade it is, the tunes of Creedence Clearwater Revival will always be amazing coming-of-age rock anthems. The band's ability to write a simple and catchy song mixed with their honesty and reckless abandon ensure that they will remain one of rock's most legendary bands, and a band that almost everyone enjoys listening to, if you consider yourself a classic-rock fan or not.

This compilation collects indie, metalcore, pop-punk and miscellaneous bands to pay homage to CCR. Like most compilations of the kind, it contains a few great tunes, a few horrible ones and a bunch in the middle. The compilation starts off strong: Drag The River kick things off with their great gruff-and-tumble rendition of “Hey Tonight”: it's a solid, moving opener that actually gets better with every listen. Park's “Fortunate Son” adds a splash of personality and has the original's energy; it's not amazing, but it's good. A Yawn Worth Yelling inject their own relaxed vibe to “Looking Out My Back Door,” and it works. Rachael Cantu's take on “Proud Mary” is kind of what you knew was going to happen at some point here: a soulful, instrumentally sparse and vocally focused reinterpretation. It ain't half bad. But things are about to get bad.

Fox & Cats lay down a fairly unconvincing pop-punk take on “Have You Ever Seen The Rain?” while Pyro, Ohio offer up a legitimately atrocious metalcore rendition of “Up Around The Bend.” Squarecrow perplex with their version of “Who'll Stop The Rain?” which is one of the compilation's most unique moments. Even after many listens, we're not sure if this is a good or bad cover, which actually means they did something right.

Bad News Bears have some soul in their “Born On The Bayou,” while the Directive suck all the feeling out of “Someday Never Comes,” one of CCR's most moving songs. We Shot The Moon's “Bad Moon Rising” has some atmosphere, vibe and passion to it, and Sandbar's “Down On The Corner” features a loose, relaxed feel that would probably please a Fogerty or two.

Closers Dakota Drive manage to pull off a great, flawless, emotive version of “As Long As I Can See The Light” to end things off with some class. It's a solid way to close this compilation, which is uneven at best, annoying at worst. There are a handful of winners bookending this, but you'd be better off diving into CCR's back catalog and downloading a couple of these tunes instead of investing in this whole album.