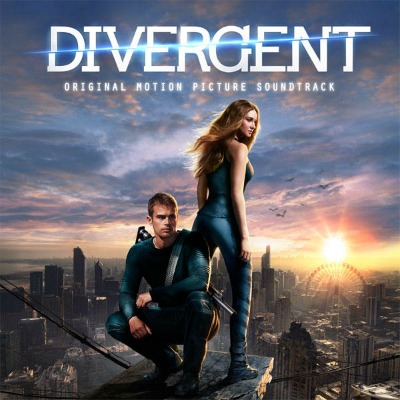 The latest dystopian book-series-into-blockbuster-film adaptation. An A-list mashup of rockers, rappers and breathless ingénues, offering a perfect intersection of critical appeal and commercial clout. The implied pressure to live up to the soundtrack success of Twilight and The Hunger Games. You already know what Divergent, the album, is gonna sound like: This is Music for IMAX.

Which, it should be pointed out, is only problematic in the aggregate. As individually considered potential singles, this soundtrack is worth at least an extra half-star. The album collects impeccably crafted mid-tempo anthems that effortlessly shift from electro minimalism to arena fist-waving; you can practically see the performance videos, interspersed with movie clips, as you listen. Ellie Goulding’s three tracks (the British singer/songwriter is described as “the voice” of heroine Tris Prior) and Snow Patrol’s Imagine Dragons-soundalike “I Won’t Let You Go” (why aren’t the Dragons, who are signed to Interscope and do this kind of thing in their sleep, featured here?) exemplify this aesthetic, but it applies pretty much across the board.

Even though the potential cheese factor is high, you have to give someone credit for this all not being more obvious. The song titles often telegraph their intent (Pia Mia's “Fight For You,” Goulding's “Hanging On,” etc.), but only the sax solo on M83’s “I Need You” crosses the line into outright schmaltz. However, with so many artists working to the same template, bombast fatigue sets in when hearing this all back-to-back-to-back; it probably makes better sense when heard for 60 seconds a pop in the context of the film. That means the tracks which offer something different are the default standouts. The two hip hop-infused vehicles—Kendrick Lamar’s raw-throated rethink of Tame Impala’s “Feels Like We Only Go Backwards” and the A$AP Rocky/Gesaffelstein collaboration “In Distress”—qualify to an extent, but the clear winner of the bunch is Skrillex’s “Stranger.” Skeletal R&B that boasts spooky vocals from Sam Dew, it inverts dubstep orthodoxy by slowing to half-speed midway through and staying put. Alone among the tracks here, it oozes subtle menace, which seems perfect for a dramatic Divergent moment.