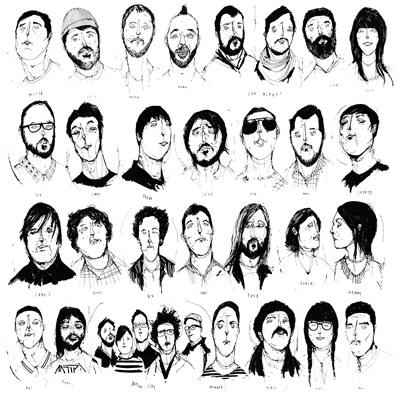 There’s something about benefit compilations that bring out the best in bands. Case in point: Friends, a 37-track beast of previously unreleased and new material created to raise money for various cancer charities by the newly reactivated Fadeaway Records. Nearly the entire collection is acoustic, and the whole thing feels very comforting and warm. For example, Chris Carrabba’s new band Twin Forks deliver a fantastic, folksy cover of Rival Schools’ “Good Things,” whose frontman Walter Schreifels contributes two tracks of his own (including a surprisingly delicate take on Judge’s “The Storm”), as does former Rival Schools guitarist Ian Love (whose standout contribution is a beautiful cover of Nick Cave’s “Into My Arms”). The original material is just as strong, though: Reggie And The Full Effect’s “Oh Fudge” is one of the few tracks that are not entirely acoustic, but it’s subdued and melancholy enough to fit in perfectly, and Nightmare Of You’s “I’m So Fucking Mad” is cute and playful, a perfect pick-me-up after Frank Iero’s dour “2.5mg Just Ain’t Enough For Me.” There’s something for just about everyone on Friends, and if there were ever a release you should buy instead of illegally torrent, we certainly hope this is it.