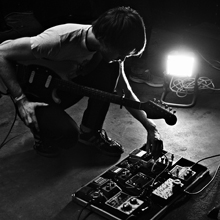 The ever-consistent Run For Cover Records celebrates its 50th release with a dozen tracks from a veritable who's-who of the best progressive punk and post-hardcore acts of the last half-decade. All but one song on Mixed Signals are previously unreleased; all but one are great at best, good at worst.

The comp begins with Polar Bear Club’s contribution, the smoky, pounding “Killin' It,” and it couldn't be more solid. But as an opener, it's a little awkward; its beginning has some leftover transitional fuzz from whatever track precedes it on the band's hotly anticipated forthcoming album Clash Battle Guilt Pride. Get past it, however, and one's treated to a “whoa”-laden, gravelly sing-along. Balance And Composure follow with “Seahorses.” While it's a little more dense than most of what makes up the band's recent full-length debut, Separation, fans of that album will get plenty of mileage out of this track, which seethes with frontman Jon Simmons' frustrated timbre and morose guitar twinkling.

After Mixed Signals’ strong start, the next batch of bands go into serious musical transformation mode. Tigers Jaw keyboardist/vocalist Brianna Collins has never sung better than she does on “Distress Signal.” Hostage Calm practically cut all ties with their melodic-hardcore past on the Beach Boys/Beatles-influenced “The “M” Word,” a finger-snapping jangle-pop cut straight out of left field. After two well-received full-lengths of hoarsely shouted emo/post-rock, CSTVT offer their cleanest vocals yet on “Bassett St.,” which closely follows the path defunct peers My Heart To Joy were heading down. End Of A Year Self Defense Family provide the stripped-down “I've Got An Idea…,” a brittle but reflective-sounding duet with solo musician Caroline Corrigan; the song draws more from ’90s Cat Power than it does ’80s Dischord.

A few other tracks seem like stylistic diversions but are still fantastic: Daytrader supply “Texts And Tomes,” which is sadder than anything else in their short catalog, but just as good, because it revives the more aggressive moments from Further Seems Forever's The Moon Is Down with precision and clarity. The World Is A Beautiful Place & I Am No Longer Afraid To Die take a break from their usual emo/post-rock collisions, closing the comp with a froggy, ’90s indie-folk strummer that's simply heartbreaking.

The Tower And The Fool (ex-Therefore I Am) have the penultimate track, “Die Alone,” and it’s a poppy alt-country number with a singing style that clashes with its music a bit jarringly. Otherwise, Mixed Signals is a must-own for followers of the label and its loosely defined, ever-expanding scene.