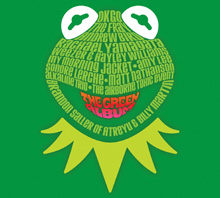 Paying tribute to the Muppets is a trickier gig than Kermit & Co.’s warm and fuzzy reputation might lead you to believe. There’s the immediate hazard: the possibility of trampling tunes that have been favorites for four decades, in some cases. Which leads us to the second, often unspoken, difficulty; Thanks in equal parts to the genius of Jim Henson and the disintegration of shared culture, the Muppets are a bigger deal than any act featured on Muppets: The Green Album is likely to be. That must be a humbling prospect when confronting one of these songs. Maybe it’s not as daunting as covering, say, Frank Sinatra, but this isn’t your average pop homage, either.

Happily, the majority of artists who signed on navigate the first hazard with uncommon grace. The Green Album is a sweet and largely sincere recasting of songs from The Muppet Show and several of its cinematic spinoffs. The closest anyone comes to overmuscling the material is Brandon Saller (Atreyu) and Billy Martin’s (Good Charlotte) cover of Dr. Teeth’s “Night Life” (which, as one of the lesser tracks in the Muppet oeuvre, did lean toward this sort of metal-boogie in its original incarnation). The two sacred tracks for fans—those would be Kermit’s signature piece on the difficulties of “Bein’ Green” and Muppet Movie favorite “The Rainbow Connection”—get, deservedly, the gentlest handling of all. Andrew Bird’s version of the first song is appropriately wry, while Weezer and Paramore’s Hayley Williams’ version of the latter steers a path between sentiment and irony and go straight to the heart of the latter. You could almost close your eyes and imagine Rivers Cuomo’s plainspoken, unaffected vocals as Kermit’s—a testament to how seriously he takes a song that, when you get right down to it, is pretty serious. (Aren’t all songs that deal with discovering your destiny and proving all the haters wrong serious?)

Occasionally, one of the guests discovers something new lurking in one of these old tracks; Evanescence’s Amy Lee takes “Halfway Down the Stairs,” an A.A. Milne poem that became an unlikely Muppet Show hit for Kermit’s nephew Robin in 1977, and turns it into a trip-hop style beauty, while retaining the sense of loneliness and childlike wonder that made the original resonate. Sometimes, the tributes take the form of note-for-note recreations, as in the Fray’s enthusiastic (if superfluous) “Mahna Mahna.” What’s heartening, however, is that almost everyone approaches the music with care.

Is there really a lack of new songwriters in the Tin Pan Alley tradition, like Muppets standby Paul Williams? Or are they out there, and is it just that the aforementioned death of shared culture means we’ll never rally around their songs the way we still celebrate the greatest hits of Kermit, Fozzie and Miss Piggy? Those questions can’t yet be answered, but if we’re reaching the end of communal music as we once knew it, the artists on Muppets: The Green Album pay it a worthy tribute while they honor the Muppets as well.