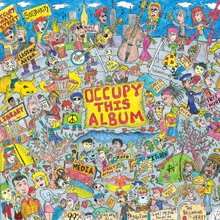 With 78 tracks on the physical version and 99 on the digital version, Occupy This Album could very well be the largest compilation since the glory days of the Slap-A-Ham Records Bllleeeeaaauuurrrrgghhh compilations. Except instead of cramming countless power-violence greaseballs onto 7-inch records with hand-assembled packaging, the folks at Music For Occupy have a four-disc boxset and 99-track digital release of folk, hip-hop, indie rock and pretty much every other kind of alt-music under the sun to contend with, all with songs related to the Occupy movement and/or how capitalism is the devil.

Despite the obvious problems with continuity and flow (not to mention the general concept of time, as in the amount of actual time it takes to comb through 99 tracks), there’s still a lot of good music on Occupy This Album. Unreleased tracks by Mogwai, Our Lady Peace, Yo La Tengo And The Lost City Rumblers, Thievery Corporation and Ani DiFranco are the gems for diehard fans to unearth from this mine of seemingly endless protest music. Filmmaker Michael Moore’s version of Bob Dylan’s “The Times They Are A-Changin’”? Well, not so much.

Notable names contributing previously released tracks include Anti-Flag, Willie Nelson, Ladytron, Jill Sobule with John Doe, Tom Morello, Patti Smith and ’90s discordant rockers Girls Against Boys (actually, hearing their double-bass-distorted “Cash Machine,” originally from 1996’s House Of GVSB, was the highlight of all 99 tracks). But even if you’re overwhelmed by the sheer amount of material (much of it skippable), you can at least know that your money is being used wisely: All proceeds go to the Occupy Wall Street movement.