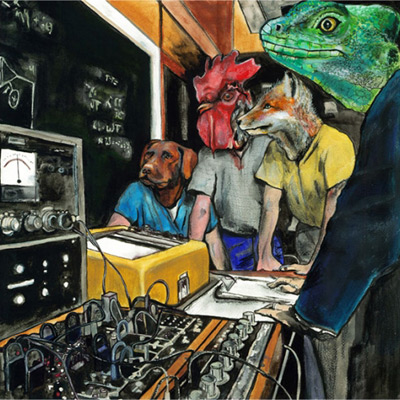 Off The Board: A Studio 4 Family Compilation

Off The Board: A Studio 4 Compilation is essentially an unintentional follow-up to Run For Cover Records' 2011 collection, Mixed Signals. Like that compilation, it features new, unreleased songs from some of the best acts in contemporary punk and emo. Although more than half the bands present actually have released material on RFC, Off The Board has a far different backstory. Producer and recording engineer Will Yip plans to use proceeds from this collection toward putting a down payment on a partnership in Studio 4, where he's made his name over the years helming records by Circa Survive, the Wonder Years, Title Fight and others. Yip's helped guide some of the best acts in contemporary punk, emo and hardcore over those years, so Off The Board naturally features a bunch of them, many of which offer up quality material.

The compilation gets automatic points for offering songs you can't get anywhere else, but it helps that the flow is solid and standouts are aplenty. Title Fight kick it off hard with “Another One,” a song about misinterpretation (well, maybe, right?). Its nimble riffs weave in and out of full-throttle, fast tempos, sounding like a cool, alternative progression they could have taken after 2009's The Last Thing You Forget EP. Daylight follow with “Siblings,” a nicely grinding update of Nirvana's “Drain You.” Citizen's mid-tempo, tension-laced “Cicuta” feels a tinge gruffer than most of their recent album, Youth, and it's a good look for them. Anthony Green's “The More You Get, The Less You Are” sounds like an outtake from his 2008 album, Avalon, and that's a very, very good thing. Pity Sex's melodic, jangly shoegaze latecomer “Euclid” is a welcomed, comparatively dissonant reprieve. Of course, there's also None More Black's “The Thing That Separates 'Em”; with a frantic energy that seems almost slippery, it's an explosive, gripping NMB song that's on par with some of their other compilation-exclusive cuts like 2004's “They Got Milkshakes” (In Honor: A Compilation To Beat Cancer) or “Nothing To Do When You're Locked In A Vacancy” (Rock Against Bush, Vol. 1).

Even the spotty stuff has its moments. Man Overboard's “I Hate Her” is a surprisingly aggressive, minute-long breakneck skatepunk cut; it's just too bad the band's simple lyrics still err on the side of unimaginative (“I told her that I hate her/She said, 'What?'/And I said, 'Nevermind'”). Sainthood Reps sound unusually nasally on “Gloom,” but the song has a brighter light than they usually allow in, and the chorus is straight dynamite. Two of the biggest talents on Off The Board have songs that feel a little too B-side-y: Circa Survive (“Nobody Can Change”), and fellow Pennsylvania natives Balance And Composure (closer “Why Do You Leave Us”). Their respective contributions push them a bit far outside their comfort zones, but the results do produce some enjoyable melodies.

Anyone who's heard Title Fight's Floral Green or Daylight's Jar knows that Will Yip tends to bring out the best in bands, so you can expect plenty of goodness on Off The Board, which should also help him to rightly continue doing what he's doing.

Anthony Green’s “The More You Get, The Less You Are”