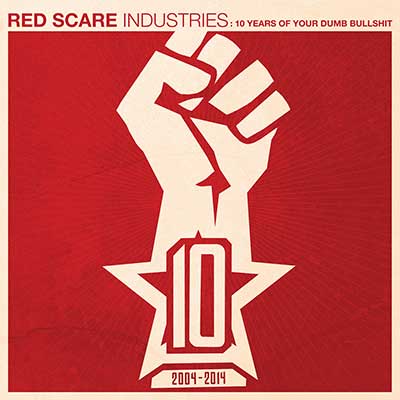 It’s hard to believe that Red Scare Industries has already been around for 10 years, but here we are with their 10 Years Of Your Dumb Bullshit compilation, featuring 17 new songs by some of their favorite roster bands throughout the past decade. Some of the bigger names here, such as Masked Intruder, Teenage Bottlerocket and Cobra Skulls, have moved on to bigger labels like Fat Wreck Chords or Rise, but it’s cool to see them temporarily back on Red Scare, contributing the kind of high-octane punk rock that made a name for the label in the first place.

Other highlights include Nothington’s whiskey-drenched “So It Is,” complete with the requisite gruff vocals, showing they are a band ready to jump up into the ranks of Lucero, Jawbreaker or Leatherface for legendary gruff-punk status. Meanwhile, the Lawrence Arms’ Brendan Kelly appears twice, with excellent results. His long-dormant side band the Falcon are back with their first track in several years; a screamy, pistol-whipped punk stab called “We Are The Bald,” which is probably the most balls-out moment on the compilation. Then Kelly returns for “Gluesday Evening Blues,” a latter album track by his Brendan Kelly And The Wandering Birds solo project.

The more obscure bands on the comp are also well worth paying attention to: Druglords Of The Avenues, Elway and the Brokedowns contribute tracks that are slightly rougher around the edges and fit in nicely with their ex-labelmates. Direct Hit!, Reaganomics and the Copyrights also deliver great tunes. The goal here was to celebrate a damn fine punk label, and 10 Years Of Your Dumb Bullshit does exactly that, with completely kickass results.

The Falcon’s “We Are The Bald”