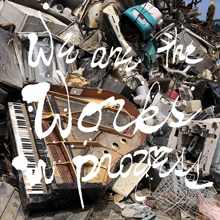 We Are The Works In Progress

We Are The Works In Progress is a compilation curated by Kazu Makino of Blonde Redhead, the proceeds of which benefiting the Japanese Earthquake Fund, Architecture For Humanity and other charities working to help Japan recover from last year’s disastrous earthquake and tsunami. Although its good intentions practically give this collection permission to be mediocre, Progress is a solid collection with some impressive participants. Interpol, Four Tet, Deerhunter and Broadcast lend rarities to the cause, along with oddballs such as Karin Dreijer Andersson of the Knife/Fever Ray and legendary minimalist composer Terry Riley. Many of these tracks are unfinished (hence the album title) but few feel like demos or throwaways. Rather, the compilation finds coherence in its scattered aesthetic with most entries unified by introspective tones of lonesome static and distant twinkles. They’re not all keepers—Andersson’s “No Face” irritates and Interpol’s “Song Seven” feels like it was built by a computerized Interpol song generator—but We Are The Works In Progress is a worthy compilation for a worthy cause, and an excellent gateway from indie rock’s heavy hitters to lesser-known experimenters.