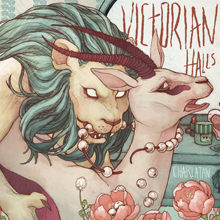 The marketing campaign for Chicago four-piece Victorian Halls is very clever in that it never mentions a certain band from the Pacific Northwest called the Blood Brothers. Defunct since 2007, the brothers of blood twisted and distorted the post-hardcore model into demented carnival tunes. Victorian Halls go for the exact same vibe, although through a mainstream emo/dance-pop filter (almost akin to post-Bloods band Jaguar Love), right down to the crazed, whiny vocals that were shared by Blood Brothers co-vocalists Jordan Blilie and Johnny Whitney, but here are handled solely by frontman Sean Lenart. But that doesn’t stop Lenart from completely aping both Whitney and Blilie, to the point that it gets uncomfortable. Like, dude, the statute of limitations on ripping off punk/hardcore vocalists is a little more than four years, you know? Piano-driven blasts such as “Burn Me Up Like A Wax-Kissed Letter” and “Dear, This Is Desperate” are so Blood Brothers-esque that Victorian Halls should be ashamed. Trouble is, the band have heaps of promise when they aren’t so busy being copycats; dance floor stompers like “It All Started In The Hall…” and “Glass Depth Mood” would be even more impressive if it weren’t for that damned copycat screech. Someone needs to tell these guys that there will only ever be one Blood Brothers and imitation is only flattery if it sounds good.