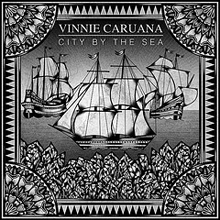 City By The Sea EP

Vinnie Caruana has played a lot of acoustic shows over the past decade, and every one of those performances can be heard in City By The Sea, his masterful new six-song acoustic EP. Packed with more of Caruana’s ever-cutting lyrical prowess and a gritty, muscular vocal performance that never wavers, the collection is arguably his strongest release since I Am The Avalanche’s defining and criminally underrated 2005 self-titled debut. Sonically dazzling and thematically powerful, the only obvious flaw to the record is that it’s over much too soon.

The years haven’t always been kind to Caruana, who weathered the oft-bemoaned implosion of his beloved former band the Movielife only to have his current outfit IATA held in limbo by a former record label, resulting in a six-year lull between releases. During that time Caruana frequently appeared at acoustic co-headlining gigs with Bayside’s Anthony Raneri, and steady NYC solo shows at Angels & Kings, no doubt to pocket a little scratch during the lean times. Now with his career soundly back on track between IATA, prog-core side project Peace’d Out and this solo record, the resulting tunes on City By The Sea play like the grand victory parade of a battle-weary survivor, channeling Caruana’s uncanny gift for plumbing the depths and poetically baring his soul into six startlingly powerful songs.

As anyone familiar with Caruana’s music can attest, there’s very little separation between his lyrics and his personal life, and as usual that adds a depth of impact and imagery to the songs on City. In the life-weary “Somehow The World Keeps Turning,” Caruana admits “I don’t wanna die in my car,” then paints a picture of “miles of tombstones and flower shops” as he sings of paying bittersweet respects to a dead friend in “Boy, You’re In Heaven.” Another textbook Caruana topic—doomed love—also gets its prosaic due on “To Be Dead And In Love,” as well as the title track, and the majestic closer, “Kingwood,” an against-the-odds declaration over an irresistibly melodic chord progression. All the while the guitar tones are rich and shimmering, the percussion is spot-on and every bit of subtle accompaniment fills the air with the appropriate sheen. In every respect, the production does these stunning songs justice.

After such a long, bumpy road to get here, perhaps the most telling moment comes near the close of City By The Sea, when Caruana wryly belts, “We have broken limbs and broken hearts and our health insurance is under par, but our souls are still intact,” over the anthemic opening strains of “If I’m A Battleship, Then You’re The Northern Lights (Thank You).” The song—an open love letter to fans—paints a visceral picture of the sacrifices Caruana and his cohorts have undoubtedly made just to soldier on. Fortunately for all, there’s just no keeping this good man down.