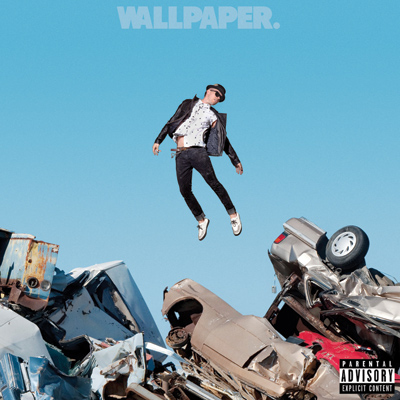 The music of Wallpaper. is not meant for close scrutiny. You won't pull any deep insight out of this Bay Area pop group's songs—that is, unless your chief concern is how much bandleader Ricky Reed (the alter ego of Facing New York frontman Eric Frederic) gets wasted and makes a fool of himself. Because on Reed's debut LP (and everything he's released to date, really), that's all he seems to really care about. When he's not trucking out every drinking metaphor in the book on behalf of a young miss (“Drunken Hearts”), he's threatening to puke his brains out, proclaims himself the “Life Of The Party” and loudly proclaims that it may be “Last Call,” but “we're just getting started.”

This album's intended goal is to be the bass-heavy soundtrack to a long night out on the town or amped up fraternity party. To do that, Reed explores the current strain of club sounds: trap (“Geek Out”), dubstep (“Last Call”), snap (“Puke My Brains Out”) and some Auto-Tuned house (“You n Me n Everyone We Know”). The young Oaklander proves to have a facility for all of the styles, and finds smart ways to make them his own. Reed splatters many songs with bits of jangly guitars and stray samples of punk records, and when he sings, loves to repeat syllables (“all the way-ay-ay now”) for a deliriously polyrhythmic effect.

As many anthemic pop records do, Ricky Reed Is Real hews a little too closely to the narcotic experience to its own detriment. It's a blast—especially when Reed is performing these tracks live, dancing and jumping madly as he does—but could leave you with a monster of a musical hangover if absorbed in excess. With Wallpaper., moderation is key. Listen responsibly.