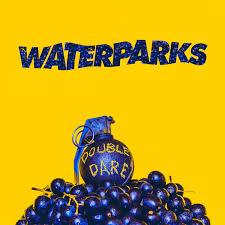 Okay, you’ve heard about Waterparks by this point. You know they were signed to Equal Vision based on a well-placed sample in EVR’s email. You know they acquired the Maddens as mentors soon after. You definitely know the true menace they are in interviews—whether they’re armed with onions or bridal veils.

So let’s put all that aside and talk about their debut full-length, Double Dare.

At its core, this is a record that takes advantage of the ever-expanding umbrella of “pop punk” and blows every subgenre away. There’s old-school Hellogoodbye electronic-pop mixed with hip-hop elements that would make Twenty One Pilots nod their approval. They get gritty on the clapback “Little Violence,” only to strip it all away on the album standout “21 Questions.” It’s all pop-something, but it’s not a nuisance that you can’t place it. Each song has a twist, a catchy-yet-haunting element that’s helped along with some of the best lyricism in the scene today. (You can belt the chorus to “Stupid For You” and cry yourself to sleep muttering the second verse to “Plum Island”—believe me, because I’ve done it.)

Going far beyond the expectations of a debut LP, Waterparks have created an album that’ll rule this scene—second only to their A-plus penis jokes.