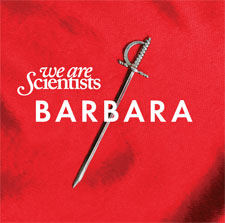 Those unfamiliar with the humor of pop-rockers We Are Scientists may need to take a crash course before spinning Barbara. A good start is to check out their comedy skits and goofball music videos on YouTube. But for fans of the band who are already in the know, Barbara is a return to the bouncy, fun form of their breakthrough album, 2005's With Love & Squalor. On 2008's Brain Thrust Mastery, the trio attempted to inject a bit more seriousness and Brit-pop influence into their best-when-kept-simple sound, to varying results, butBarbara finds them back in their comfort zone–fun, danceable pop-rock.

From the one-two punch of opening tracks "Rules Don't Stop" and "I Don't Bite," to more playful (and played out) numbers like "Foreign Kicks" and "You Should Learn," Barbara shines from start to finish. New drummer Andy Burrows (formerly of U.K. rockers Razorlight) adds a whole new element to the Scientists' sound, contributing harder hits and more dynamic fills than previous drummer Michael Tapper. Meanwhile, vocalist/guitarist Keith Murray and bass player Chris Cain are at their best, delivering punchy, precise hooks and pleasing vocal lines to match clever lyrics such as, "Every single word from you is uncomfortably appealing" (from "Ambition"). To properly peg the sound ofBarbara, think British bands like James and Erasure wearing sweater vests and sporting porn mustaches, plus heaps of subtle sarcasm.