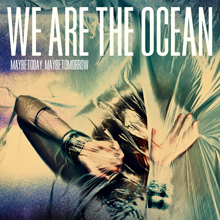 We Are The Ocean

Losing a half of a two-headed frontman is tough. Taking a stylistic left-turn under the same moniker that a band built their fan base under is a big risk. Trying do both at the same time is an unenviable (and inadvisable) task, but that’s exactly what We Are The Ocean have done with their third full-length, Maybe Today, Maybe Tomorrow. The album has its obvious strong suits; the range and soulfulness of singer Liam Cromby’s vocals (flying solo on this record following co-frontman Dan Brown earlier this year) and the anthemic choruses (although the gang vocals in those anthemic choruses are overdone to the point that they eventually lack impact), but more often than not those strong points are quashed by music that just sounds too derivative and by-the-numbers to distinguish them from a slew of other modern-rock radio bands. Longtime WATO fans will likely find the familiar nods to Alexisonfire’s less-aggressive songs comforting (and engaging), but it’s the moments when the band delve into songs that sound like a Foo Fighters B-side (“Bleed”), a rock ballad by the Goo Goo Dolls (“Young Heart”) or a Nickelback rock anthem (“The Road (Run For Miles)”) that the album really misses its mark. Maybe Today, Maybe Tomorrow is neither good nor bad; it’s just inoffensive—and that’s exactly why it’s a bit of a disappointment. It feels safe and too familiar. There’s no question that the talent is there, but the band’s willingness to forge their own path might not be.