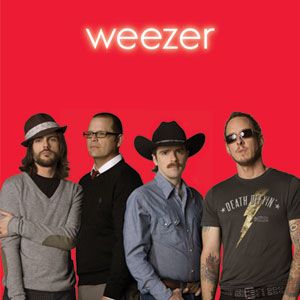 After 2005’s semi-return to form Make Believe, many assumed Weezer were gracefully riding off into the sunset, having finally pleased critics, fans and themselves with an album that while nowhere near as generation-defining as 1994’s Weezer or 1996’s Pinkerton, at least left those who had an emotional investment in the band with a good taste in their mouth. Couple that with a handful of interviews frontman Rivers Cuomo gave that put the band’s status into question, it seemed like Weezer Nation were ready to lay their bespectacled heroes to rest. So when their new, self-titled disc (referred to as the Red Album) was announced, message boards exploded with thoughts of what the new tunes would sound like. If Make Believe was Cuomo finally apologizing to all who he had wronged in recent years-akin to an all-night argument with a significant other that ends in both people crying but satisfied that issues had been resolved-what would the morning after sound like?

Freedom, apparently. The Red Album is the first time in Weezer’s career where it sounds like the band are honestly having fun recording, for better (the instant classic “Troublemaker”) or worse (“Everybody Get Dangerous”-EMF’s “Unbelievable” for a new generation, complete with a “booyah”-laden chorus). The disc’s first single, “Pork And Beans,” is vintage Weez, with Cuomo sounding as sardonic and disaffected as he did on the first two records, littering his lyrics with pop-culture references from Oakley shades to hip-hop hitmaker Timbaland.

The band sound looser and more interested in the music they’re making, proven by the two American Idiot-esque multi-part suites (“Dreamin’” and the epic “The Greatest Man That Ever Lived (Variations On A Shaker Hymn)”). Each suite has some slam-dunk movements as well as some collar-tugging ones (Cuomo rapping “You try to play cool like you just don’t care/But soon I’ll be playin’ in your underwear” ). What makes them work is that Cuomo & Co. commit to their experiments fully.

Adding to the Red Album’s good vibes are song contributions from guitarist Brian Bell, bassist Scott Shriner and drummer Pat Wilson, who each step in front of the mic to sing lead for the first time in the band’s history. Wilson’s “Automatic” is the best of the bunch, sounding almost exactly like his side project the Special Goodness, but it’s obviously not a competition between the band members, just a way to make sure everyone’s creative voices are heard. It took 15 or so years, but finally, Weezer are a team. The Red Album is a wonderful jumping-off point for their second wind.

RELEASE DATE: June 24
TRACKLIST
1. Troublemaker
2. The Greatest Man That Ever Lived (Variations On A Shaker Hymn)
3. Pork And Beans
4. Heart Songs
5. Everybody Get Dangerous
6. Dreamin’
7. Thought I Knew
8. Cold Dark World
9. Automatic
10. The Angel And The One