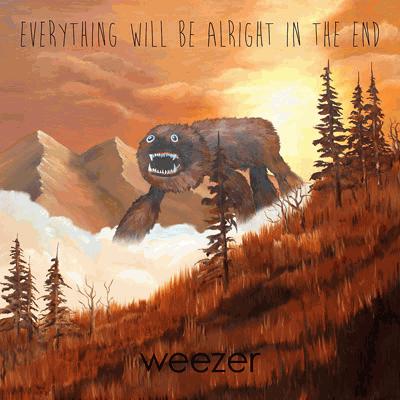 Everything Will Be Alright In The End

Reviewing Weezer albums has always been exceedingly difficult. It's easy to look back on the Blue Album and Pinkerton with the benefit of hindsight; when there are two decades of history and obsessive fandom there, it's easy to proclaim both albums as perfect, flawless, five-star classics. But if I were reviewing Pinkerton—unequivocally my all-time favorite album by any band—upon its 1996 release, who's to say I wouldn't nitpick the hell out it, from the repeated masturbation references (“Why Bother,” “Across The Sea”) to the reduction of women to mere objects of a man's desire (“Tired Of Sex,” “Pink Triangle”) to the rough, abrasive tones and production unbefitting of a band who previously worked with Ric Ocasek?

Here’s the thing: I believe all of that to be true, but I also choose to ignore it due to the intense feelings the album has created within me. A great Weezer album—a truly great Weezer album—is one that divides a fan’s brain in two, with one side asking, “How does this sound?” and the other responding, “Who cares; how does this make me feel?” It’s why on any given day, I could defend any given Weezer record as their artistic peak but then turn right back around and list a myriad of problems with it. Left brain/right brain. Logic versus emotion. The struggle is real.

I’m saying all of this now because I want you, the reader to know, that on a different day, I could tell you everything that is wrong with Weezer’s ninth album, Everything Will Be Alright In The End. But today, the right brain wins: This album is perfect, and you need it in your life.

Yes, EWBAITE is somewhat of a concept album (see Weezer’s YouTube channel for the multi-part video series which deepens the album’s mythology), but in no way do you need to know anything extra to gain enjoyment out of these songs. Yes, the lyrics to “Back To The Shack” are self-referential, but it’s easy to overlook when you bob your head to the mid-tempo, two-chord rocker. It’s followed by “Eulogy For A Rock Band,” which could very easily be just as self-referential; in it, frontman Rivers Cuomo sings about a band having “a good run/15 years of ruling the planet/But now your light is fading.” Cuomo has said in interviews it’s about one of the band’s influences but refuses to name who; it’s not really a stretch to think it’s about Weezer themselves, and their tumultuous career they had between 1994 and 2009, the latter point being when many fans finally jumped ship thanks to the ultra-glossy pop-radio bid Raditude, which then sent the band into a rebuilding period that eventually birthed this record. Regardless of its inspiration, it’s an incredible song, with dual lead guitars opposite a nasty synth screech and an incredible burst of falsetto vocals in the bridge.

For every song on EWBAITE that finds Weezer pushing their own creative envelope, there is another that simply finds the band writing the absolute best pop-rock songs they can. “Lonely Girl” is deceptively simple, an uptempo, overdriven Beach Boys stomper that is a clear descendant of Pinkerton’s “Why Bother” and the Green Album’s “Photograph.” The vocal harmonies from guitarist Brian Bell are spectacular, and the use of dynamics to bring the song back down in its final verse before punching out the chorus one more time is sublime.

“Da Vinci” is another example of Cuomo & Co. being absolute masters at their game. Structurally, the song isn’t that far off from the band’s 2008 hit “Pork And Beans,” but its tone is completely different; whereas that song was all about doing whatever you want, no matter the consequences, “Da Vinci” is a love song of the purest order, directed toward a beautiful woman (“Even Da Vinci couldn’t paint you… I’m at a loss for words”)—or perhaps a soothing lullaby to a crying infant (“We’ve come so far, now here we are/We made it through the night/I know we will be strong, ’cause still/Everything will be alright”). The words are clear without being direct, making the lyrics potentially universal. And the arrangement—oh, God, the arrangement!—from cleverly placed whistling to some simple keyboard lines poking through to a synth low in the mix, this song reveals so much on each successive listen.

The risks on EWBAITE are plentiful, too, and never falter: The 5/4-to-4/4 time signature shifts in “Cleopatra” are unnerving on first listen but feel right at home on repeat plays, especially once Cuomo uncoils a particularly venomous guitar solo. Speaking of solos, the one in “The British Are Coming” is absolutely spectacular, easily one of the best in Weezer’s career, and the nonstop guitar heroics in the album-closing trilogy of “The Waste Land,” “Anonymous” and “Return To Ithaka” deserve to be the theme for every Midwestern town’s 4th Of July fireworks display for the next 20 years. (It’s really, really easy to imagine a bunch of shit blowing up in the night sky when Rivers Cuomo is furiously sweep picking.)

Oh, what more to say about EWBAITE? “Go Away” is a perfect ’60s pop duet co-written and recorded with Best Coast’s Bethany Cosentino; Cuomo’s lamentations about everything he’s given and everything asked of him in “I’ve Had It Up To Here” feel honest and earned (and sting a little, too); “Ain’t Got Nobody” is thick, crunchy and just nails it with a solid “doot-doot” post-chorus right when the song is on the way out of the door; “Foolish Father” is moody, powerful and cathartic, building to the redemptive, emotional choral refrain, “Everything will be alright in the end.” I could write as many superlatives as there are in the dictionary about this record and still wouldn’t feel like I have done the album justice. It is an album heavily labored over, meticulously assembled and created out of a weird period of disappointment and perceived lack of direction, with a surprising amount of respect toward the fans that betrayed the band years back when they decided Cuomo shouldn’t be allowed to follow his own muse and should instead please their desires. So what did he do? He used his left brain—logic—to access his right brain—emotion—to create what might not be the best Weezer album, but most definitely is the perfect Weezer album, at least right now.