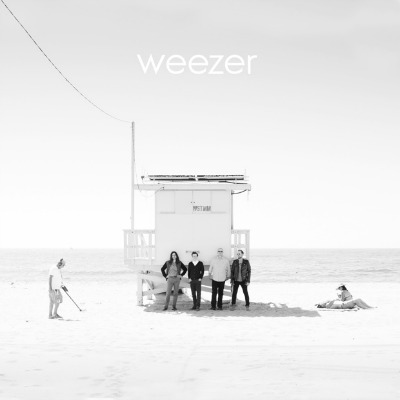 Much has been written about the so-called Weezer renaissance of the past few years, a period that began with 2014’s Everything Will Be Alright In The End which saw the group reunite with longtime producer Ric Ocasek for their least-detested album in some time. (In some alternate universe, that’s actually become a compliment for the band who have virtually become the epitome of “damned if you do, damned if you don’t” since dropping Pinkerton in 1996.)

So it’s easy not to hold it against Cuomo when he bemoans references to his band’s alleged comeback in the press, as if he’s finally bowed to the critical slings and arrows and time-traveled back to the mid-’90s to channel his band’s early days. That said, Weezer’s 10th album—to be forever known as the White Album—certainly encapsulates many of the musical traits fans first fell in love with on Pinkerton and its predecessor, 1994’s Blue Album debut.

Much of this is likely thanks to über-fan-turned-hit-producer Jake Sinclair (Panic! At The Disco, Fall Out Boy), who certainly knows what he expects out of a Weezer album. Sinclair’s dreams come true on tracks like the brooding “Do You Wanna Get High?”—replete with double-tracked vocals, crunchy guitar tones and some of Cuomo’s most abrasive lyrics since the mid-’90s—and “L.A. Girlz,” which, despite its title’s questionable spelling, is a towering 3/4 rocker that oozes classic Weez, along with Cuomo’s trademark self-deprecation.

But it’s not all salad days here: “Jacked Up” is built around a hip-hop groove and pounding piano, certainly a new sound for the group but one that falls a bit limp with Cuomo’s strained vocals, while “Summer Elaine And Drunk Dori” is a heavily palm-muted number that puts Cuomo’s love of Nirvana’s “Lithium” on full display.Elsewhere, the band channel feel-good California vibes with swirling Beach Boys-style harmonies (“California Kids”) and the sun-kissed acoustic-guitar-and-tambourine stomp of “(Girl We Got A) Good Thing.” Cuomo’s songwriting has shown shades of Brian and the Wilson brothers in the past (most notably in the Green Album’s airtight simplicity)but the more overt references here are nonetheless a welcome treat. (It doesn’t hurt that Sinclair gave bassist Scott Shriner the heavy assignment of studying Pet Sounds’ intricate bass lines while in the studio.)

But despite what critics and fans (and his producer) are after, Cuomo’s not actively trying to channel ghosts on the White Album. There’s no denying the singer’s early material was perhaps a bit too reactionary to the public opinion, and even though some might see Cuomo’s work here as fan service, the renewed energy and spirit (best seen on the standout “King Of The World,” a whole-hearted love song penned to Cuomo’s wife) are likely the result of him not overthinking things and just letting the songs exist.

“There was no thought process,” Cuomo told Rolling Stone earlier this year when pressed on the musical similarities between “Do You Wanna Get High?” and the Pinkerton fan favorite “Pink Triangle.” “We're the same guys playing the same instruments in the same kind of studio in the same city. It's not surprising we get a similar result.” This, in a nutshell, is the White Album: It’s not a return to anything, because the things that made Weezer great 22 years ago—the undeniable hooks; the awkward, nonsensical, “Wait, what did he just say?” lyrics—never really left. They were always at the heart of Weezer’s music, though at times obscured by Lil’ Wayne cameos and an overreliance on pop-culture references. The weirdness is still on display here (Hell, one minute Cuomo is lamenting the extinction of tiger sharks on “Wind In Our Sail”, the next he’s working “cannoli” and “sweaty overalls” into “Thank God For Girls”), though it feels more lovingly packaged this time around.

So feel free to call it a resurgence, a comeback, a resurrection or whatever else you will. All that really matters is that the White Album’s songs are great, and not just great for the 2016 version of Weezer. They stack up beside the band’s best work of the past 15 years, an outcome that should keep Weezer,as Cuomo declares on “(Girl We Got A) Good Thing”,“Marching forward/oblivious to all the hate around us.”

“King Of The World”