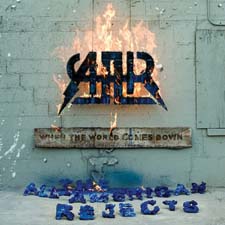 When The World Comes Down

The All-American Rejects have stayed busy in the three years that have passed since the release of Move Along. Aside from touring, they’ve collectively launched record labels and clothing lines, acted for TV and film, played on other bands’ albums and even hopped in the producer’s seat. Yet somehow, the band managed to keep a relatively low profile in the year-plus time they’ve spent writing and recording their third full-length, When The World Comes Down, for the most part avoiding the paparazzi blitz experienced by some of their peers.

Pet projects haven’t been the only change in the past three years; the music scene is an entirely new landscape, with dime-a-dozen pop-rock bands, many of whom are directly influenced by AAR, dominating the scene (we’re looking at you, Boys Like Girls and We The Kings). The Rejects–vocalist/bassist Tyson Ritter, guitarists Nick Wheeler and Mike Kennerty and drummer Chris Gaylor–needed their new disc to make a pretty big statement, proving that the “elder statesmen” are still originators, not imitators. Fortunately for them, When The World Comes Down comes out on top.

Continuing in the vein of their previous releases, AAR still mix upbeat anthems (“Real World”), midtempo rockers (“I Wanna”) and pop ballads (“Mona Lisa (When The World Comes Down)”), though overall, the disc is dialed down compared to their previous two efforts. Even the first single, the insanely catchy “Gives You Hell,” has a mellow, kiss-off vibe before busting into gang vocals for the last chorus. Let’s face it: What AAR do musically isn’t rocket science. But for what they do, they’re one of the best, incorporating depth of musicianship, thoughtful lyrics and uncommon instrument choices. For example, “Sunshine” features a layered string arrangement; “The Wind Blows” has an ’80s-pop bent that would perfectly fit a John Hughes movie’s high school dance scene; and “Another Heart Calls,” AAR’s first duet, showcases Catherine and Allison Pierce of the Pierces.

While World is simply a fun pop record at its core, the effort, time and most importantly, experience (gleaned both from the members’ extracurricular projects and the near-decade they’ve been together) that went into its making clearly sets AAR apart from newer bands who keep attempting to capture this same sound with much less ambition. The Rejects make pop songs sound so effortless, and that’s not easy.